Sign up for Newsletter
ADVERTISEMENT
IN PARTNERSHIP WITH
TIFF 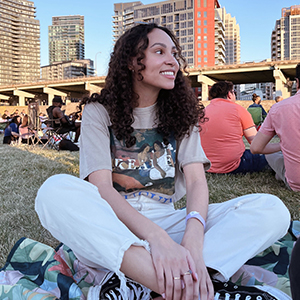 Any woman of colour knows what it likes to feel like you don’t belong in a certain space. Whether that’s due to imposter syndrome or low self-worth, it can sometimes be challenging to feel like you are worthy of making your voice heard or taking up space. But if you ask Viola Davis, she’ll stress that it’s very important.

As part of TIFF 2022, Twitter Canada held a Q&A with the cast of The Woman King, the Viola Davis-led film that also stars Lashana Lynch, Thuso Mbedu, Sheila Atim and John Boyega. The cast discussed making the film and the importance of taking up space as Black actors in Hollywood.

Our voices have been stifled, we haven’t been seen, we’ve been invisible for so long.

“Listen, one of my favourite sayings is, what the caterpillar calls the end of the world, the master calls the butterfly,” she added. “And I think as Black people, and especially as Black women, we’ve been given insurmountable odds. Our voices have been stifled, we haven’t been seen, we’ve been invisible for so long.”

“I always say… there was a reporter who interviewed me the other day. He was a white man, [a] very very nice [man]. He said ‘I love the film, but I know I’m not the audience,’ and kept trying to talk. And I had to say, ‘I’m going to stop you right there. You are the audience. Because every time we do a movie, we have to appeal to you. We have to water down our voices, we have to water down our images, in order to fit whatever your perception [is], to ease your fears, to do all that.'”

“And when you don’t step into the room, and you don’t take risks, and you sort of just cave under the weight of the status quo, then it continues,” she said.

Related: TIFF 2022: Here’s where to meet your fave celebs in Toronto.

Later, Davis explained the importance of the movie, which she says she fought for over the last seven years. (She is one of the film’s producers.)

“I’m going to be honest, I’m going to make it plain in the words of Malcom X: There are no words to quantify what that fight is. Everyone thinks about the movie and its inception, and then they see it on screen. They don’t talk about the process in between.”

“If you were a fly on the wall, and you can see every time you walk in that room you’re hustling for your worth,” she said. “You’re fighting for simple stories, the hair, the makeup, what we look like.”

Related: 10 times representation happened for Black women and why it matters.

1.
Is the ‘No Pants’ Trend Gen Z’s Latest Fashion Aesthetic?
Krizia Ramos
2.
Who is Alix Earle and Why is Everyone Talking About Her?
Lydia Hrycko
3.
Celebrity Couples 2023: The Hottest New Celeb Couples This Year
Slice Staff
4.
Looking to Relocate? These are the Most Affordable Countries to Move To
Chelsea Brimstin
5.
The ‘Vanderpump Rules’ Season 10 Trailer Teases Divorce, Fights and Garcelle Beauvais
Chelsea Brimstin
ADVERTISEMENT

Celebrity Weddings 2023: These Famous Stars Tied the Knot This...

These celebs were ready to say "I Do."
Slice Staff

Name a Cockroach After Your Ex (and Feed It to an Animal) at...

Send a cold message to your former flame this Valentine's Day.
Chelsea Brimstin

Pregnant Celebrities 2023: All the Stars Expecting This Year

Here are all the celebs expecting this year.
Slice Staff

10 Must-Dos During an Internship to Make a Great Impression

Here's how to make a great impression.
Joshua Soucie

Who is Alix Earle and Why is Everyone Talking About Her?

Get to know TikTok's queen of GRWM videos.
Lydia Hrycko

It's the Bravo parenting crossover we didn't know we needed.
Chelsea Brimstin

10 Ways to Care for Your Body That Have Nothing to Do with...

From sex toys on TikTok to celeb-inspired vibrators, this is what's hot this year.
Shorey Andrews
ADVERTISEMENT