ADVERTISEMENT
IN PARTNERSHIP WITH
Adventures

My soul has been hurting in 2020. Is there anyone whose hasn’t? This armpit of a year has sucked for a lot of people, for about a million reasons. But to be honest as a working mom I’ve been running on fumes for a while now. Since way before we all obliviously rang in 2020 with our champagne dreams, thinking it was going to be the Best Year Ever.

How we’ve all aged since then.

Parents have been ripping their hair out trying to work from home while watching/teaching their kids since March. It’s bloody hard, not to mention soul-sucking. I’ve been struggling to do it with my two- and four-year old for almost a year, and some days I can’t help but become one of those coffee- and wine-meme moms who sobs in the pantry. Not that I have a pantry, but you get the point.

That’s why, when the chance came up to flee for the weekend with my husband and two of our best friends to Tobermory, it was like a lifeline back to my mental health. Friends, sleep, and tranquil hikes in one of the most beautiful places in Ontario during the fall? Sign. Me. Up. 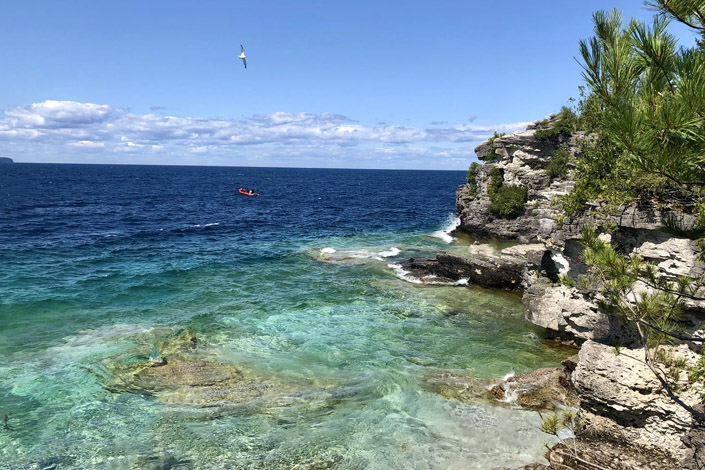 And also, pass the wine as I count down the days until we can leave.

Leaving the kids behind

Our kids had only ever been for a handful of sleepovers in the past, but luckily my mother-in-law (who is the opposite of every negative mother-in-law trope that’s ever existed) was willing to move in for the weekend. It was a huge ask because we’ve also got two sweet-but-yappy chihuahuas and a cat who thinks he’s a dog. But she was happy to do it, and we were thrilled to start packing.

I think the kids were pretty pumped too. It can’t be fun to have parents constantly on the brink, so knowing that Nana was coming over to feed them Happy Meals and to do fun crafts with them while letting them sneak in extra tablet time was cool for them too. As for my husband? Well let’s just say that Brandon was all-in when I suggested we secretly get matching shirts for us and our friends like we were having a Bachelorette weekend in Vegas. We even invested in extra CBD oil and queso dip for the hotel room, because we’re wild like that.

This was the first time Brandon and I had been anywhere together without the kids in four-and-a-half years.

So on a bright and early Friday morning in September, custom shirts on, we dropped the kids off and blew dodge to our destination some three-hours away. With our pumpkin spice lattes in hand (don’t judge us) and the windows cracked to let the fresh fall air in, it was a beautiful drive with bursts of glorious fall colours.

You know what else was glorious? Listening to music that didn’t belong on a Disney playlist or involve a “Wonky Donky” or a “Baby Shark.” Parents, you know what I’m talking about. Our playlist was a weird mix of classic rock, Pink, and at one point “WAP,” because when else are we ever going to get the chance to jam out to the dirtiest song currently on the internet?

Related: Don’t be ashamed, be responsible: Stigma smashing advice for moms who like cannabis.

The gorgeous town of Tobermory… and social distancing

Here’s the thing. As much as we planned to have an amazing kids-free weekend, we kind of forgot to book all of the things we wanted to do in advance. The Monday before we left my girlfriend and I realized we were out of luck when it came to hiking at the grotto, since tickets were sold out. But we did manage to snag tickets for the ferry to Flowerpot Island, which was probably all the touristy stuff I could handle anyhow. We’re still in a pandemic, after all, and while local travel was still being encouraged when we went, we weren’t about to be dumb and stop social-distancing. 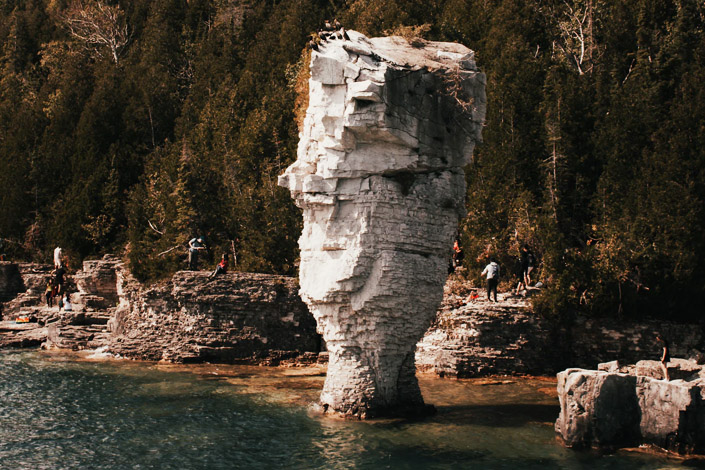 At this point I should probably mention our friends have been in our bubble since that became a thing. So we were comfortable with them, but everywhere else we went it was masks on and six feet apart. We dined on patios for the most part and all of the local shops were only letting so many people in at a time, so we totally felt safe. Our room at the Blue Bay Motel had also been equipped for the occasion, and regular things like the coffee maker or toiletries were only available upon request.

Did I miss my kids? Of course. Did I feel guilty about leaving them behind? Hard no.

Still, I have to say there were a lot of people in the town. Tobermory is basically like a little strip around a port, with cute shops, a few restaurants, and weirdly, very few places to get coffee. There’s a lingering smell of fish and chips in the air which makes sense since there are at least such joints to grab grub. There’s also a pub, a pizza joint with a real stone oven, and a place to get real Beavertails or fresh ice cream. Some of the shops have had to close down because of COVID, which is a story a lot of towns are telling these days. But overall it was cool to see lineups outside of the restaurants. Those restaurants all close at 8 p.m. by the way, so as it turns out late dinners aren’t really a thing there.

As someone who is usually drooling in bed by about 9 p.m., I can tell you that was more than okay by me.

Flowerpot Island… and all the hiking

On Saturday morning, after a peaceful night’s sleep in which I didn’t have a kid’s elbow in my back or a cat sleeping on my head, we took the ferry to tour the shipwrecks and then head over for a hike on Flowerpot Island. Since I’d never been there I had no idea what to expect, but I think I was assuming the shipwrecks would look a little more like the footage I’ve seen of the Titanic. Or maybe that boat from The Little Mermaid, when Flounder almost gets eaten by an angry shark.

Anyhow these shipwrecks looked nothing like that, since we basically just spun around them and looked down through the clear water at their shadows below. The crew was giving a history lesson on them, but I heard none of it thanks to the wind and masks, which everyone was wearing. Honestly it was cool, but I had more fun looking at the ridiculously expensive cottages lined up on the shores, and making up stories about who lived there.

Once we spun around the shipwrecks enough times to make me remember that I get seasick, we turned around and saw the famous lighthouse before journeying on to the main destination. Flowerpot Island basically looks like a flowerpot thanks to the water that has slowly eroded the lower rocks over the years, and there are two smaller, distinct “flowerpots” to the side of it that all the tourists line up to see and take pictures with. Including us, because when in Rome.

But the really cool thing about Flowerpot Island is that even though there must have been hundreds of tourists there when we went, by the time we took off on the hiking trails we saw very few people. We did almost trample on not one, but two snakes that slithered in front of us like they were going to a party, and for a brief moment I missed my kids because they are obsessed with snakes.

It was a beautiful four hours that went by in a flash, and for the first time in a long while I felt more connected to myself, to nature, and to my friends. I’m happy we managed to get tickets, however if I were to go back to Tobermory in the near future, I would probably skip the island in order to hike somewhere else with even less foot (and boat!) traffic. Like Devil’s Monument, which is a short drive from the town. We stopped there Sunday for another hike before starting the long drive back, and the picturesque views of the Georgian Bay were so pretty that I could have sat on the rocky beach we found for hours and hours. Unfortunately, it was time to go home.

Taking a step back, and taking it all in

This was the first time Brandon and I had been anywhere together without the kids in four-and-a-half years. We knew the weekend would be over in a flash, and it was. In between eating, walking, catching up with our friends, and just hanging out while taking in the amazing views, time flew. 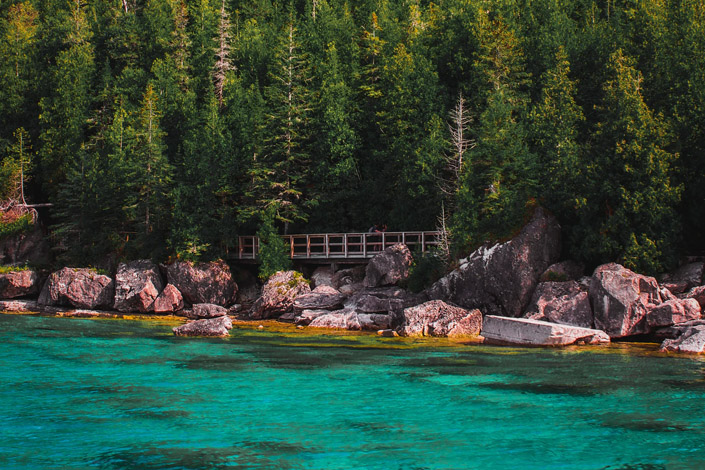 But we really needed those two and a half days. Not just to connect with each other and have a fun excuse to wear matching shirts, but to get in touch with ourselves. I know it sounds cliché but to me there’s no better place to do that than in nature. This trip was the restorative restart that I needed as we now face a second wave, more isolation, and what will probably be a brutal winter for everyone.

Did I miss my kids? Of course. Did I feel guilty about leaving them behind? Hard no. If anything I realized that I need to do more things for myself once in a while, because that’s the only way I’m going to be able to be a better parent and a better partner. Stress isn’t a good look on me, and I’ve been wearing it for the past four years like armour.

Unfortunately with the pandemic shifting the way it has and money being tighter than ever, who knows when we might get the chance to get away for the weekend again. All I know is that if and when the stars line up for another few days away again, I’ll be hopping in that car and playing “WAP” as loud as my soccer mom SUV speakers will go.

Related: I took a flight during the pandemic and here’s what stressed me out most.

Everything We Know About Rihanna’s Fenty Perfume

Have you tried this delicious trend yet?
Natalie Harmsen

On the hunt for a new job for an exciting new career? We've got you covered.
Doug Murray

This kind of drama requires some extra planning and poking by producers.
Shadi Bozorg

Rihanna reveals herself as a RHONY fan.
Tracey Moore

You Could Own a Slice of Cake From Princess Diana and Prince...

How much would you pay for this aged dessert?
Natalie Harmsen

How Much Sleep Do You Really Need? This Study Breaks it Down

One in three adults don't get enough shut-eye.
Laura Grande

All The Hottest New Celebrity Couples of 2021

Your jaws might drop at some of these surprise couplings.
Laura Grande
ADVERTISEMENT